AIDS IS A KEBAB! HONESTLY! If the Egyptian Army ever decide they don't need this guy anymore then there is a great career ahead for him as a comedian:

I wonder if they ever ask why Allah is so kind to give us such lovely diseases, and then, to really rub it in sends fools like this to 'cure' us?


UPDATE 0711 26/02/2014
Good news! Pepijn has sent us a link to a story from an Egyptian news site called Almogaz. The translation is not perfect, but it seems that Dr Essam Heggy, Scientific Advisor to the Egyptian President, has condemned the C-FAST (also now sometimes being called I-FAST). Well done Dr Heggy! Here is the link to the original, and below the translation.

sci
Shen, Dr. Essam Heggy, Science Advisor to the President of the Republic, a sharp attack on the invention of the armed forces to treat the virus «C» hepatitis and «AIDS», which was announced during the opening of a number of projects carried out by the Engineering Authority of the Armed Forces, last Saturday, in the presence of President Adly Mansour and Dr. Hazem Beblawy Prime Minister «outgoing», and Field Marshal Abdel Fattah Sisi defense minister, describing innovation as «scientific scandal of Egypt» evidence and documents.
He said «Haggai», in remarks «home», that the invention is not convincing and has no scientific basis and is clear from the fact demo of the device, which was broadcast on television channels, in addition to the research on innovation has not been published in any scientific journals prestigious, referring to the that «the subject of such sensitivity In my personal opinion hurts the image of the state, and would be counterproductive in scientific research, and I had hoped that there will be greater warned about what was said in the dissemination of such information».
The scientific adviser to the president: I want to be clear and explicit, what has been said and published about the invention of the armed forces hurts the image of scientists and science in Egypt, pointing out at the same time that the foreign press will translate the press conference announcing which of the invention Medical Center, to be used negatively in the abuse of the image Egypt internationally.
He disclosed that the President of the Republic and the Minister of Defense has not been A_i_arthma with display of information and details about the invention, and that individual effort for some people, stressing that the President Adly Mansour, Field Marshal Abdel Fattah Sisi surprised what was said about the invention without reference to them, and that attending the Conference of the announcement of the device does not mean agreeing upon .
«International scientific research»: lack of clear description and fine details
He said «Haggai» It did not have any background prior to this conference, and he was hoping not to hold a press conference or to be announced only after consulting Egyptian scientists in the field of liver disease, and AIDS, adding that all the scientists who are working inside and outside Egypt are infected shock of the invention, Because it has no scientific basis, and that the invention overcome the logic of scientific and human in proving the effectiveness of this device in the treatment of patients with HIV «C», pointing out that the worst thing is the videos and directories that have been published about the innovation of the armed forces, and considered it as a «shock scientific and bad publicity for the project ». He said that after his return next week from the United States, which he is visiting currently, will meet with the President and the Secretary of Defense to discuss what happened scientifically, and that he would convey the entire picture, to coordinate with after any announcement for scientific research, stressing that it will be published clarification from the presidency on this invention.He added: I am a consultant Scientific for the presidency do not support this discovery very clearly, and I contacted the president personally spoke with him was introduced, and the President «Mansour» and Marshal «Sisi» went to attend the opening of projects, medical and scientific armed forces without being put on notice the details of these achievements, so it did not The auditing of research before displaying details in a formal conference, pointing out that they were surprised discovery, also was surprised by the scientists and physicians of the armed forces as well, and supposed that science is not the diplomacy, and it is an insult to Egypt at home and abroad, and is not the first time that this has happened.
Dr Essam Heggy that he has documents to prove that the invention of the armed forces is not scientific, and the first document which is a message search, who invented a medical device on the basis, that the search did not include details of scientific innovation clearly and precisely, and all the contents of an image device and a summary of the year for the way it works and this does not apply to scientific research, and the second document, a copy of the research published in a scientific journals is internationally known, inter alia third document provides a summary of the scientific research International in which she says: «This research has nothing to do scientific research, and does not represent the world and is building on the precise details of the discovery ».
Summary detect body of scientific research for international research on the invention for it lacks the description is clear and precise details of the functioning of the device, did not materialize, the requirement to provide sufficient information about it, as indicated by the terms of international scientific research.

In the following video you will see the literally unbelievable C-FAST 'detector' developed in Egypt for diagnosing diseases such as Hep C and AIDS.

BUT..in this video they also present the CCD (Complete Cure Device). Watch and let us know what you think. Could it be true? My bet is unlikely, but am no medico so not qualified to judge.

Pepijn has also spotted this report, which suggests that an advisor to the Egyptian President is calling for an independent review, which would be excellent. We think that since Pepijn published his blog post, the media have been bombarding the Egyptian Government with skeptical enquiries and that this report is the result. let's hope they do it properlY! We will keep you informed if we hear more.

UPDATE: We are told by an informant who asked to try out the C-FAST that they were refused on the grounds that optimal performance requires a lot of training. I wonder where we have heard that excuse before? Oh yes. The bomb 'detector' guys like McCormick and Bolton used to say exactly the same thing, and they used to charge for the training too! Cheeky buggers!

Some of you might remember my post about a dodgy device called the C-FAST which was claimed to be able to detect Hepatitis infection. See link below.

Well now we are told it can also diagnose HIV infection as well! OH YEAH!

Sadly, despite the best efforts of this blog and many others to put a stop to this nonsense, it has reared its ugly antenna again. Please see here:

When is something patently bullshit?

Regret the original images from that post have disappeared so here they are for your enjoyment again: 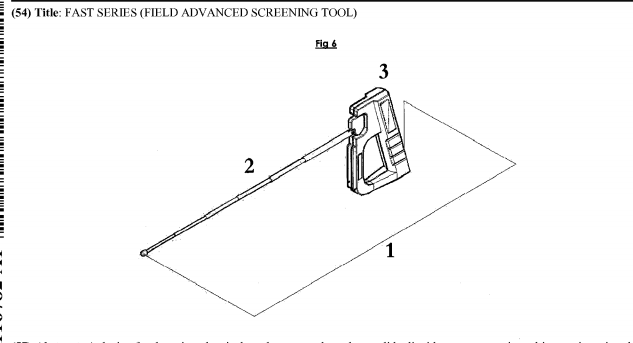 Peter
Fraud buster and hater extraordinaire. Conqueror of the conmen. Slayer (well, not exactly!) of shysters. Scourge of the scammers. hey, we can all have a bit of fun, except the crooks of course!